The church is half a mile to the west of Esh on the road to Quebec, and has a spacious car park. It is one of the oldest churches in the Diocese. 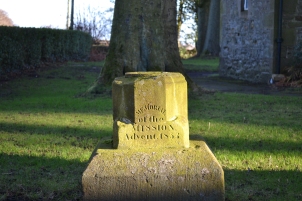 In 1798, in Salutation Field to the west of the village of Esh, a church was built on land gifted by the Smythe family of Esh Hall. It was built to replace a chapel at Newhouse which had fallen into disrepair. Although laws against Catholics had been relaxed it was still 40 years before Catholic Emancipation so, to keep a low profile, the church and its environs were designed to look like farm buildings. The foundation of St Michael’s school also dates from this time. The parish priest Fr John Yates (a Douai man) moved into the presbytery on its completion in 1804. The parish covered 400 square miles and included the present parishes of Lanchester and Brooms. The original  stable can still be seen in the barn adjacent to the church and the cottage at the gate was the home of the coachman and his family.

The apse was added when the church was enlarged in 1841. The then parish priest Fr William Thompson, a great friend of Cardinal Wiseman, dedicated the new altar to him. In the 1970s during treatment for dry rot, graffiti and the foundations of the original church were found behind the altar. Fr Thompson retired in 1880. His successor, Canon Samuel Harris served the parish for over 50 years until his death in 1933. He added the south aisle and saw Lanchester created a separate parish from Esh in 1926. (Brooms had become a separate parish in the late 1830s)

Canon Harris was succeeded by Fr Hugh Cogan, well known for his work in Catholic education. During his tenure the school was rebuilt and enlarged to meet the Board of Education requirements. The church roof also needed repair, and the stone slabs were replaced by tiles.

St Michael’s Church is a Grade II listed building. The stained glass, particularly that behind the altar and the west window, is of historical significance. Also of note is the oriole to the left of the altar which links the church to an upstairs room in the presbytery. Rumour has it that this was where the parish priest would sit and listen critically to the curate preach and keep an eye on the congregation. Among other things of note, the church organ was built by Harrisons of Durham in 1900 and the present lectern and altar are by the Mouseman of Kilburn.

Outside the War Memorial has been recently refurbished. Many of those named are recorded as being killed on July 1st 1916, the first day of the Battle of the Somme. Their descendants still live in the parish. The graveyard was closed in the 1950s. Two parish priests are buried there but sadly there is no plan of the graves so many are no more than mounds of earth. The coach house is a private dwelling. The parish is now part of the John Boste family of parishes.