St Joseph’s Ushaw Moor is a daughter church of Our Lady Queen of Martyrs, Newhouse with the first church (a tin tabernacle) being built to the east of the Flass crossroads. The early ‘tin tabernacle’ church was opened on December 19th 1909 and was served by Fr (later Canon) Shelley who acted as ‘knocker upper’ for the (mainly Irish) Catholic miners and their families as he rode his horse from Esh Winning past Ushaw Colliery on Sunday morning to celebrate Holy Mass.

In late 1911 Fr Shelley became the priest in residence living in the end house on Durham Road.  In 1925 St Joseph’s Ushaw Moor became a separate parish with Fr Shelley as parish priest. The parish consisted of Ushaw Moor, Sleetburn (New Brancepeth) and Broompark – Bearpark became part of the parish in 1935. The current brick church foundation stone was laid on 19th June 1930 with the dedication of the completed church (alongside the presbytery) occurring on 21st April 1931.

Canon Shelley died on April 22nd 1946 and was buried in the centre of the newly created cemetery.  He as well loved by people in the village – catholic and non-catholic alike. His death was succeeded by Fr Oswald Whitaker who was responsible for extending and reordering the sanctuary with marble on the walls and a mosaic floor in 1955.  Soon after the work was finished Fr Whitaker died   (April 7th 1956) and was replaced by Fr Lawrence Thompson.  During his time the old tin church was replaced by the current brick build parish centre and Catholic Club.

Following Vatican 2 liturgical changes meant the sanctuary had to be reordered.  This was done in the time of Fr John Clohosey with the sanctuary being extended forward and the altar rails and pulpit being removed.  A narthex was created with a new font doubling as a Holy Water font at the rear of the church. 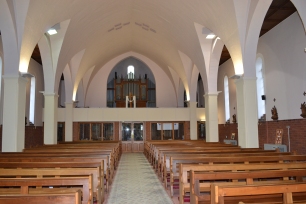 All of these changes were accomplished by the work of parishioners both fund raising and labour with the help of outside architects.  Thanks are also due to organisations and individuals who donated land, materials, and furnishings to create and maintain what is a village landmark and community facility as well as a place of worship.

The decline of parish priests and the drop in congregations across the diocese over a number of years has resulted in formation of a Family of parishes. St Joseph’s Ushaw Moor, Our Lady Queen of Martyrs Esh Winning, St Michaels Esh and St Joseph’s Langley Park, are currently overseen by Fr David Coxon.